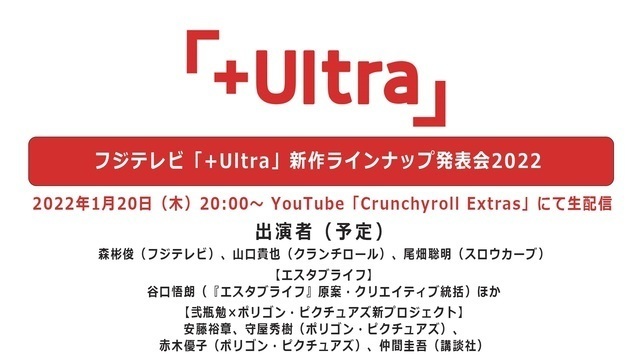 Fuji TV “+ Ultra” lineup presentation 2022, January 20th (Thursday) delivery decision! Goro Taniguchi’s latest work “Estab Life”, Tsutomu Nihei x Polygon Pictures new project, and other new information have been unveiled at once!
Based on the concept of “I want to expand anime culture overseas,” Fuji TV’s anime frame “+ Ultra” has been transmitting high-quality, world-class anime works to the entire world. It was announced that a lineup presentation that will release the latest information on the new animation that will be broadcast in 2022 will be delivered on January 20, 2022 (Thursday).
“+ Ultra” has become a joint production system with Crunchyroll, a major US animation distribution company, and started with a new system in which Slow Curve participates in the joint development and marketing of new projects.
At this lineup presentation, the latest information on high-quality animation works that will be rolled out to the world will be announced at once.
Original work “Estab Life” by Goro Taniguchi, who has produced many topical works such as “Code Geass Lelouch of the Rebellion”, “Ningyo no Kuni”, “Knights of Sidonia”, “BLAME!” Introducing new animations scheduled to be broadcast in 2022, such as a new project in which Polygon Pictures teams up with Tsutomu Nihei, a manga artist who is very popular both in Japan and overseas. In addition to the screening of the latest PV that will be released for the first time, the directors and producers of each work will be on stage to talk about the outline of the project, the world view of the work, and the story.
The video of this event will be distributed on YouTube “Crunchyroll Extras”.
Expectations are rising for the latest information on “+ Ultra”!
[Distribution information]
■ Fuji TV “+ Ultra” lineup presentation 2022 Outline
Date and time: Thursday, January 20, 2022 20: 00-21: 00 (planned)
Contents: New announcement of Fuji TV animation frame “+ Ultra”
Performers (honorific titles omitted):
Akitoshi Mori (Fuji TV), Takaya Yamaguchi (Crunchyroll), Toshiaki Obata (Slow Curve)
● “Estab Life”: Goro Taniguchi (“Estab Life” draft / creative supervision) and others
● Tsutomu Nihei x Polygon Pictures New Project: Hiroaki Ando, ​​Hideki Moriya (Polygon Pictures), Yuko Akagi (Polygon Pictures), Keigo Fellow (Kodansha)
MC: Hisanori Yoshida (Nippon Broadcasting System Announcer)
Distribution page in YouTube “Crunchyroll Extras”: https://youtu.be/N9hqBptmBz4
[Fuji TV “+ Ultra”]
Based on the concept of “I want to expand anime culture overseas,” Fuji TV’s late-night anime frame is launching high-quality, world-class anime works not only in Japan but throughout the world. Starting in October 2018, we are announcing attractive content one after another to the whole world. Broadcast every Wednesday from 24:55. In addition, broadcast on BS Fuji and KTV, THK, TNC, UHB