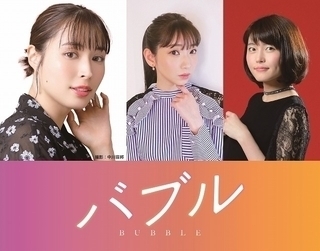 (C) 2022 “Bubble” Production Committee
It has been decided that the original animation “Bubble” directed by Tetsuro Araki and WIT STUDIO will be officially exhibited in the generation section of the 72nd Berlin International Film Festival (February 10-20). At the same time, an additional voice actor cast was announced, and it was found that Alice Hirose, Sayaka Senbongi, and Marina Inoue were participating.
“Bubble” is a collection of the best creators such as screenwriter Gen Urobuchi, character design draft Takeshi Obata, and music Hiroyuki Sawano. Jun Shison plays the main character, Hibiki, and popular voice actors who have starred in the works of Araki-gumi such as Mamoru Miyano, Yuki Kaji, and Tasuku Hatanaka are participating in the co-starring. The story is set in Tokyo, where gravity is broken by the bubbles that have fallen into the world. It became a playground for some young people who lost their families and a battlefield for parkour team battles. Hibiki, who has been attracting attention for his dangerous play style, falls into the sea where gravity is distorted by unorthodox play, and is saved by a girl Uta who has a mysterious power. The encounter between the two leads to the truth that changes the world.
The generation section of the Berlin International Film Festival is aimed at works depicting the world of teenagers and children, and consists of two competitions, “Generation 14 plus” and “Generation K plus”. “Bubble” will be screened at “Generation 14 plus”.
Director Araki said, “I was very surprised to be invited to the’Bubble’at the Berlin Film Festival. I’m really honored that our work has never been brought to such a place. Thank you. “Masu!” “At the same time as the film and myself are being tried, I think that all the work I have accumulated in my career as a director is now being tested. I want to see how far it will reach. Thank you! ” 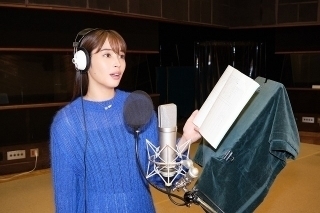 Hirose plays the role of Makoto, a scientist who investigates bubbles that have fallen all over the world.
(C) 2022 “Bubble” Production Committee
Hirose will play the role of Makoto, a scientist who investigates the bubbles that have fallen all over the world while acting with Hibiki and others. This time it was an appearance after an audition.
Hirose “It’s enough if I can meet Director Araki of my favorite anime” Attack on Titan “. I auditioned with that in mind, so I was more nervous when the appearance was decided. I felt various pressures after dubbing. I trembled, but I did my best. At the time of dubbing, the main part was incomplete, but I was still excited by the beautiful world of real and fiction, the tremendous dynamic feeling, and the amount of heat contained in the image. Anyway, it’s a movie that brings together gorgeous creators and gorgeous voice actors, so I want to see the completed version as soon as possible as a spectator! ”
Director Araki said, “Alice Hirose was very nervous at the time of recording, and I felt a serious personality in her work, and I fell in love with her!” It seems that she was completely fascinated by her personality. He also said, “I think it was perfect for the character Makoto, who is energetic and playful, but also has an intellectual side! Thank you for your wonderful performance!”
Senbongi is “Kabaneri of the Iron Fortress” (unnamed role), Inoue is “Attack on Titan” (role of Armin) and experienced Araki group. Casting has not been revealed at this time, but it seems that both of them felt the charm of the work while doing dubbing. From the comments, you can see that there are great expectations for the finished version.
Senbongi “I was very happy when I heard that I could participate in the director’s latest work !! I enjoyed recording this work while sharing the enthusiasm with the director and staff. It’s a great honor to be able to do it. This time it’s a dubbing with a small number of people, so I don’t know the whole picture yet! But I’m sure it will be a wonderful work! I hope everyone can look forward to it and wait. ”
Inoue: “I was full of joy to be able to participate in the new world of Mr. Araki again after hearing this story. I was excited about the liveliness, the refreshing feeling, and the freshness that spreads across the screen, so I was dubbing from beginning to end. I’m really looking forward to the completion from now on. I think that Mr. Araki’s detailed attention can be glimpsed in various scenes, so I would like to hear various stories after the completion. Please look forward to the whole picture of the characters! ”
“Bubble” will be released in theaters on May 13. Prior to the movie version, the Netflix version will be distributed worldwide from April 28th. 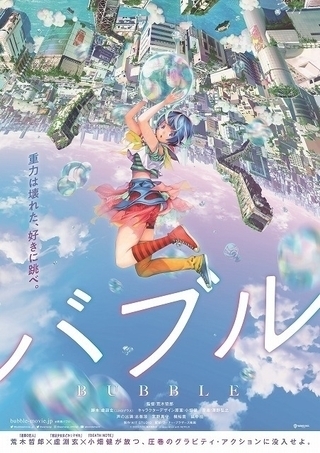