"Saint Seiya" Dohko of the balance seat, digest video of Shura of the goat seat released.

(C) Masami Kurumada / Shueisha / Toei Animation
As part of the 35th anniversary of the animation of Masami Kurumada’s battle action manga “Saint Seiya,” videos of “Libra Dohko” and “Capricorn Shura” are shown on YouTube’s Toei Animation Museum channel. It was published.
Dohko and Shura, who are counted as the 12 gold saints who reign at the highest rank of saints, are both related to the main characters, Bronze Saint and Dragon Shiryu. Deep person. In the video released this time, from the TV animation version that started broadcasting in 1986, the child tiger who led Shiryu as the old master of Goromine and the sacred garment (Cross) of the Dragon constellation that is said to be the strongest. Shura, who fought a deadly battle with Shiryu with the hand sword “Excalibur” that cuts off the shield of the two, and the two people’s activities in “Saint Seiya: The Sanctuary” are summarized in 1 minute 30 seconds each.
On the 35th anniversary special page (https://www.saintseiya-anime.com/ja/35th/) of the official website, a visual drawn by Dohko and Shura by Michi Himeno, who was in charge of character design for the anime version, has been added. The visuals for 6 of the 12 Gold Saints, half of them, were completed. 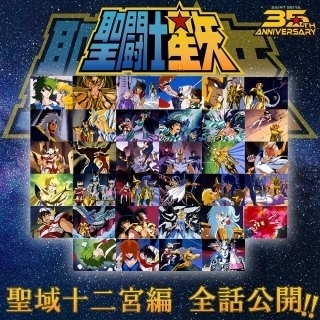 タグ: "Saint Seiya" Dohko of the balance seatdigest video of Shura of the goat seat released.