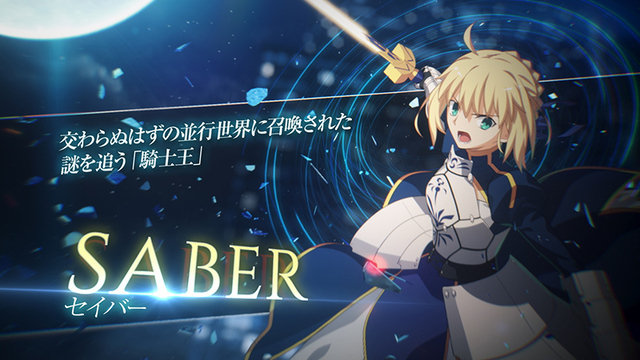 Saber of “Fate” participates in “MELTY BLOOD: TYPE LUMINA” released today! The battle video with Arcueid is also released!
Today, September 30th, the 2D fighting game “MELTY BLOOD: TYPE LUMINA” will be released on PS4 / Switch / Xbox One / Steam. Saber of the “Fate” series has been announced as a new playable character.
“MELTY BLOOD: TYPE LUMINA” is a fighting game based on the world view of “Tsukihime -A piece of blue glass moon-” released in August 2021. Based on Kinoko Nasu and TYPE-MOON, you can also enjoy the event story of more than 10 characters.
⇒ 2D fighting game “MELTY BLOOD: TYPE LUMINA” for PS4, Switch and Xbox One will be released in 2021! New “MELTY BLOOD” based on the new world view of Tsukihime
⇒ Program distribution from 19:00 on September 29 (Wednesday)! “MELTY BLOOD: TYPE LUMINA” Runaway Arcueid VS Koma Hikuma gameplay video released!
Regarding “MELTY BLOOD: TYPE LUMINA” finally released today, it is clear that “Saber”, which can be said to be the face of the “Fate” series, will participate in the war. This is the first time in the “MELTY BLOOD” series, and now all 14 playable characters are available.
“Fate” Saber participates in the electric shock! Battle trailer released
The battle of “Saber” who pierces the chivalry with the sacred sword in hand is reproduced for the first time in the battle animation of “MELTY BLOOD” so that it can be enjoyed as a 2D fighting game! Familiar techniques such as “Promised Sword of Victory” and “Wind King Iron Hammer” have also appeared, and you can experience various Saber techniques with your own hands.
With the first appearance, there is no mechanism called “Eirei Summon” in the newly written event story, and Saber, who was summoned to a parallel world that should not intersect, pursues the mystery that he was summoned and engages in battle. It’s fun to play this game to see what kind of characters you meet and what happens in the event story.
The interaction between the characters in “Tsukihime” and “Saber” is a must-see for fans with fresh content. Let’s play and see.
[Battle Trailer]
Lots of information for the first time, such as movements and techniques during the battle, and the state of the battle with “Arcueid Brunestud”! 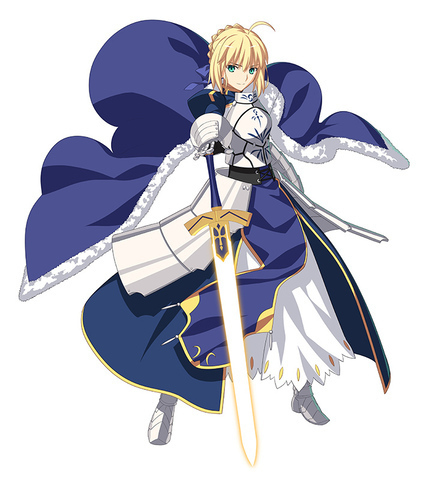 ▲ Saber (CV: Ayako Kawasumi)
“Knight King” chasing a mystery summoned to a parallel world that should not intersect
True name: Altria Pendragon.
She is a female swordfighter with a dignified appearance, with blonde hair tied up behind her and blue and silver armor. She is the knight of the sacred sword that bundles the Knights of the Round Table, which is famous in the streets as the legend of King Arthur.
For some reason, she finds herself in this world where there is no mechanism of “summoning spirits”, and she decides to explore the city of Soya in order to solve the mystery. 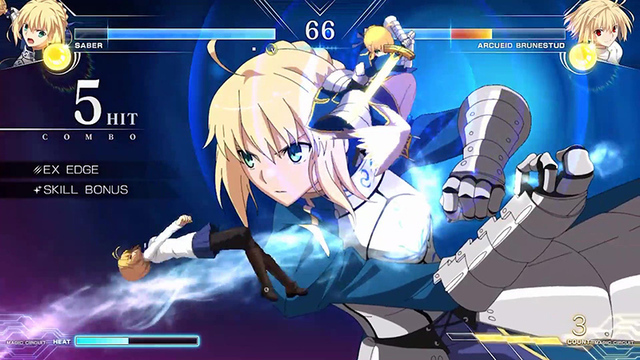 ▲ “Arcueid Brunestud”, the royal family of the true ancestors, and “Saber”, the legendary hero. Two heroines with great power meet in the world of “MELTY BLOOD”⁉
Features in battle 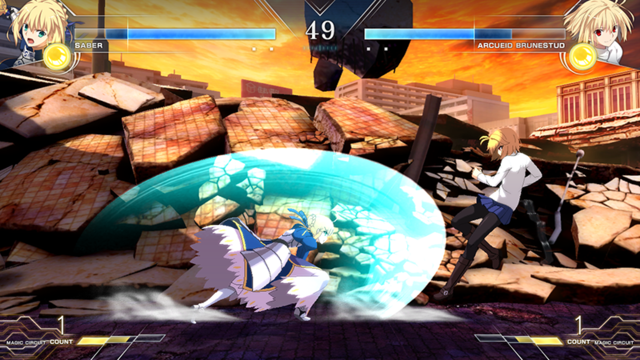 ▲ “Saber” is a battle-style character who takes on the challenge of head-to-head competition by taking advantage of the length of reach with a sword and the speed of instantly closing the gap. Since he has many techniques to move at high speed, he has a strong movement to set up a rush from a medium distance at a stretch.
She has easy-to-use normal moves and special moves with various derivations, and if you master both, you can attack hard to be overlooked by the opponent.
In addition, it is equipped with two types of arc drive, which is a super powerful special move, both of which have powerful performance such as wide range attacks and counter attacks. ▲ “First Air”, which swings the sword sharply, can be used as a restraint for a long time, and can be derived into a two-stage additional technique, so even if it is guarded, bring it to the reading depending on whether or not to perform an additional technique. Can.
In addition, one of the additional moves in the first stage, “Second Air Defeet,” is a lower attack, and one of the additional moves in the second stage, “Third Air Break,” is a middle attack. Can also be shaken.
The moon skill “First Air” launches a lower attack while stepping deeply. Since the advance is very quick, it is effective to aim at the opponent who showed a gap at a medium distance.

▲ In “Elfin Dance”, where you swing your sword while moving at high speed, the movement movement changes depending on the command you enter. The light attack version is a technique to retreat once and then turn back to attack, and the medium attack version is a technique to go straight and attack quickly, and it can be used as a means to approach the opponent.
Also, if you press and hold the button to activate it with the blowback edge version, you can immediately move to another action without launching an attack after moving.
The moon skill “Elfin Dance” is a middle-stage attack that retreats quickly and then jumps and attacks from the air. By avoiding the opponent’s attack by moving backward and interweaving the weak attack version “Elfin Dance”, it is powerful to use it to mislead the opponent’s response. 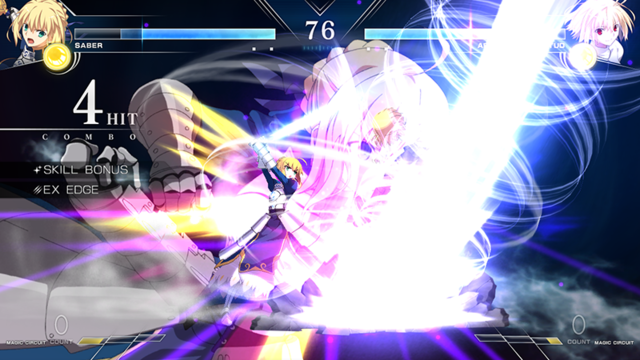 ▲ “Wing Air” is a technique that has a wide range of attack in the air ahead. The attack is quick and it is easy to get caught at the beginning of the opponent’s jump.
In addition, the EX Special Move “Wing Air” can be used as a counterattack when attacked by the opponent because it temporarily becomes “invincible” without being attacked by the opponent.
In addition, it is a character with a means to put pressure on the opponent in the air with a technique with a wide attack range, such as the EX-only special move “Kazeo Tetsumaki” that shoots the wind diagonally upward to attack.
Digital limited edition set introduction