Yu Shimamura is in charge of the narrator for the "Yoshiyuki Tomino World" document.

News Saturday, January 8, 2022 20:00
Yu Shimamura is in charge of the narrator for the “Yoshiyuki Tomino World” document. 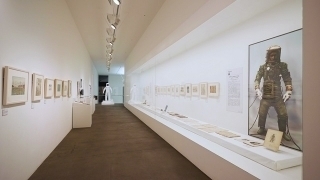 New scene photos of document movies are also released
(C) Tezuka Productions Tohokushinsha
(C) Tohokushinsha
(C) Sunrise
(C) Sotsu / Sunrise
(C) Sunrise Bandai Visual Bandai Channel
(C) SUNRISE / BV / WOWOW
(C) Office Eye
Yu Shimamura will be in charge of the narration of the document movie “Yoshiyuki Tomino’s World” -Film works entrusted to the future-, which was produced based on the exhibition “Yoshiyuki Tomino’s World” which has been touring nationwide since 2019. Was decided. Shimamura plays the heroine Aida Sulgan in “G’s Reconguista” directed by Yoshiyuki Tomino.
In addition, a digest video of the document movie was also released. Beginning with a dialogue between Yoko Taro, the director of the game “NieR” series, and director Tomino, many famous creators such as director Shinji Higuchi of “Shin Ultraman” scheduled to be released in May and producer Toshio Suzuki of Studio Ghibli appeared. The contents of the exhibition, which traces the footsteps of director Tomino from his childhood to the present, can be seen in part.
In the exhibition “Yoshiyuki Tomino’s World”, director Tomino’s work from joining “Mushi Production” to the present, known for “Mobile Suit Gundam”, will be viewed and his achievements will be verified. The document movie “” Yoshiyuki Tomino’s World “-Film works entrusted to the future-” interviews curators who planned the exhibition and creators who are closely related to Director Tomino, and uses Tomino’s unique techniques and techniques. It will be a content that highlights the attitude of manufacturing.
“‘Yoshiyuki Tomino’s World’-Film works entrusted to the future-” will be released on February 25th exclusively at Premium Bandai and A-on STORE. Blu-ray is 7480 yen and DVD is 6380 yen. If you make a reservation for Blu-ray by January 18, a disc containing the pattern of “[Opening Memorial Talk] Who is Yoshiyuki Tomino?” (Approximately 120 minutes) held at the Fukuoka Art Museum will be included as an early benefit. ..

タグ: Yu Shimamura is in charge of the narrator for the "Yoshiyuki Tomino World" document.