Wataru & Tiger King's strongest duo are back for over a century! Interview with Mayumi Tanaka & Kazue Ikura to commemorate the screening of "Mashin Hero Wataru The Seven Souls of the Dragon God Maru -Reunion-" 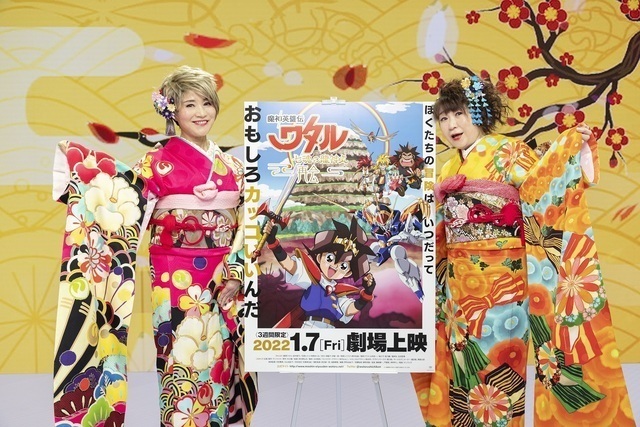 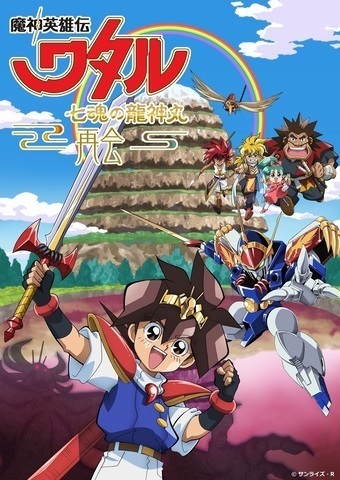 ──Please tell us your impressions when you heard that you will make “Mashin Hero Wataru The Seven Souls of the Dragon God Maru” and the special edition “Mashin Hero Wataru The Seven Souls of the Dragon God Maru -Reunion-“.
Mayumi Tanaka (Tanaka) Actually, there have been many talks about making new works. So I felt like I was waiting without expecting too much, I wonder if I could really do it. It was officially decided, oh, it really is! It was like that, so I didn’t really believe it at first (laughs).
Kazue Ikura (hereinafter, Ikura) I was very happy, but I am exactly the same. Sunrise is the same as “City Hunter”, but it’s not a good time to break the 30th anniversary. A new work will come out in a little odd year. Both “City Hunter” and “Mashin Hero Wataru” are new works on the 32nd anniversary (laughs). That’s why I was surprised and very happy.
Tanaka: It’s nice to see it at the theater again.
Ikura: With the current beautiful image quality, there aren’t many opportunities to see it on a large screen. I’m really looking forward to it. 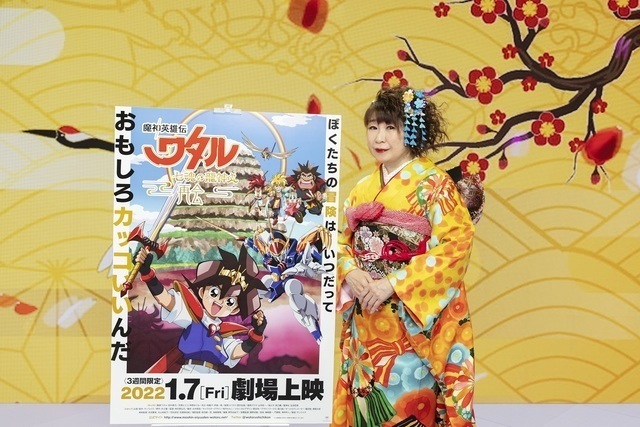 Mayumi Tanaka
──How long have you been playing Wataru and Toraou in earnest?
Tanaka: It’s been quite a while.
Ikura “Cho Mashin Hero Wataru” was in 1997? So it’s been 20 years since then. 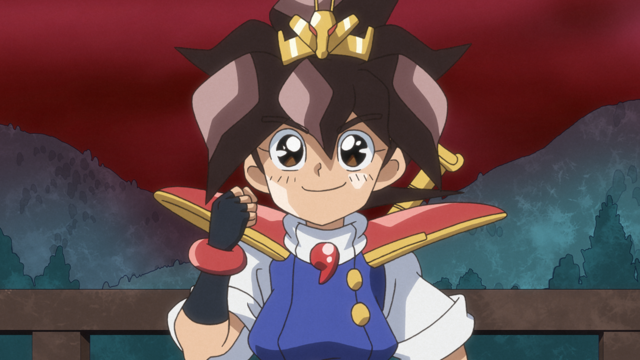 ──Is the feeling of playing the boy Wataru and Toraoh coming back for the first time in about 25 years?
Tanaka: It was the voice that I was a little worried about until I played. Now that my voice is low, I wonder if it was so high when I saw the old video. Before recording, I thought about whether Wataru elementary school students should be expensive. I wonder if that height can bring out the momentum of the boy’s voice. When I actually play it, I’m in a play, so I don’t care about that. As I get older, my voice gets lower, and Luffy from “ONE PIECE” has grown up, so while I’m playing as low as possible, my voice gets lower and lower.
Ikura: That’s right. Also, Mayumi-chan is playing a boy’s voice in active duty, isn’t it? Because I was a school teacher recently, I was a little worried.
Tanaka: The rest (Makimura of “City Hunter”) is Kaori and women.
Ikura: Yeah, I wasn’t a constant boy. But I’m an actor, so I can do it. The thing I was most worried about was the feeling of being crazy. When you grow up, you feel calm. Children are running all the time for no reason. When you grow up, you forget the feeling that you feel like going to a place where you should walk. Before I played, I was worried that I could feel that way, but when we all started working together, it naturally happened, so I didn’t have to worry so much.
Tanaka: This time, the Tiger King was solid.
Ikura: That’s right, like the last one.
Tanaka: (In past works) Toraoh was a mess and Wataru was right.
Ikura: I wonder if there are some elements of Shoryuko’s personality or growth, but this is a mystery.
Tanaka: The relationship between Toraoh and Shoryuko is still a mystery to us (laughs). 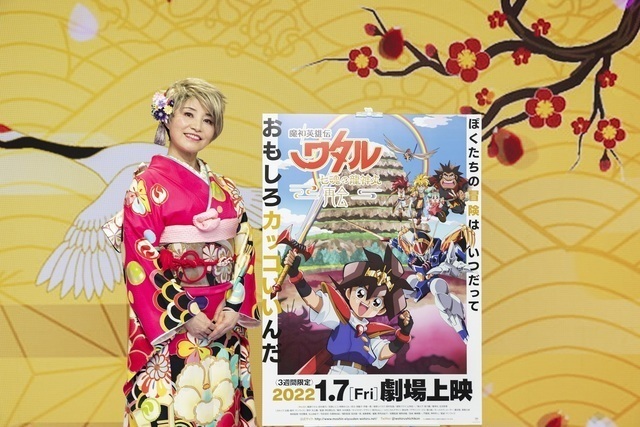 Kazue Ikura
──Director Shina said that when he returned to the original Mt. Sokai, he changed to Shoryuko and felt that there was no last scene for Toraoh and added Toraoh’s monologue to the new cut.
Ikura: After all, it’s also lonely. With the new cut, I felt that Toraoh would take on the loneliness and return to Shoryuko. Including that, I felt the growth of the tiger king in “Seven Souls”. Toraoh stopped Wataru from wanting to play in the amusement park, but Shibaraku-sensei and Himiko also like to eat.
──I have an image that the tiger king seems to take the initiative in playing and eating.
Ikura: It’s more like eating than Himiko (laughs).
Tanaka: It’s like a giant. I felt like a naughty child.
Ikura: That’s why I’m telling you to make the movements of your heart around that with the Toraoh spin-off (laughs).
──Shoryuko is a very nice and attractive character, but I think there are many fans who like Toraoh’s naughtiness and freedom.

Ikura: I think it’s really difficult to be in a position like a bird in a cage of Shoryuko, so I think it feels like a tiger king. In that sense, I feel sorry for Shoryuko because she has something to carry on her back, so I think it’s good to have the purpose of going to defeat evil and to be free-spirited as a tiger king. 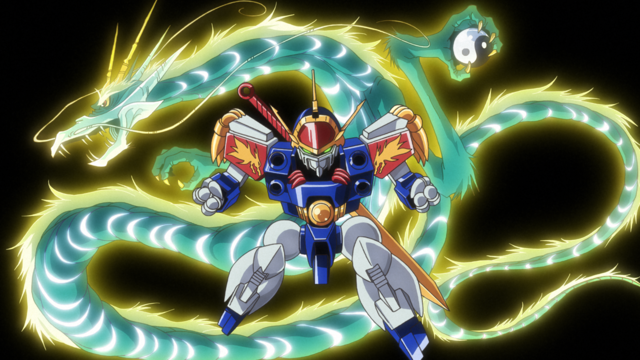 ──This time, Ryujinmaru, who always guided Wataru, gets lost and gets caught up in negative emotions. I think there were some scenes that were difficult for Wataru to play, but how about that?

Tanaka: It’s lonely that Ryujinmaru hasn’t always helped me from the beginning. I wonder if I feel thankful again because there is no such thing as a matter of course. There is such a scene that Wataru scolds Ryujinmaru who always led me. When it comes to Ryujinmaru, it’s hard to say, “Ryujinmaru-kun, that’s not the case.” But Ryujinmaru can be told by Wataru, and Wataru who wants to play in the amusement park can be stopped by Toraou. I think it’s very important that there are people who scold me. “Mashin Hero Wataru” is a work that you can study your life (laughs).
Ikura Wataru calls “Ryujinmaru” over and over again. I want you to hear that the phrase that just calls the name has a bit of a sad feeling, and there are various emotions and nuances.
──You called a lot of Ryujinmaru’s names and shouted out various special moves.
Tanaka: You did various things. Various genie are also lively.
Ikura: You also cosplayed. In that sense, there is a lot of variety, so it’s fun to see it as a single work in a theater.
──In “Seven Souls”, the elements that color the world, such as Wi-Fi and mail servers, have been completely renewed.

Tanaka: That kind of thing is very “Wataru” -like! At that time, it was a public phone, but now it is a smartphone. Wataru wore roller skates at first, but this time he wore drone boots.
Ikura: Shibaraku-sensei’s phone has run out of battery, and I got a reply on LINE. I think that is also fun. 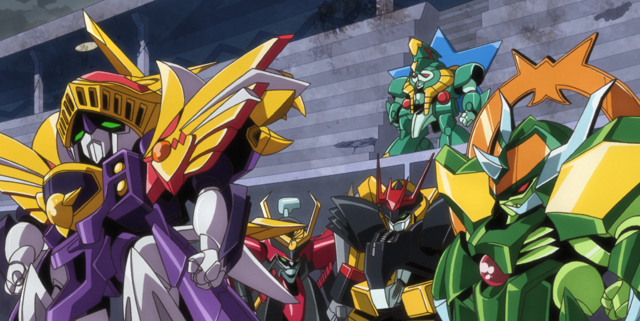 ──Did you have all the dubbing this time?
Ikura: It’s difficult now, and I think it’s up to 3 people each.
Tanaka: It feels like the “Seven Souls of the Dragon God Maru” started with the Corona and ended with the Corona. When I used to play “Wataru”, I used to go out to eat, go to cherry blossom viewing, and get together all the time. Though they were always together.
Ikura: I didn’t drink or eat this time. When I was in the TV series, I usually went to eat lunch after dubbing.
──I heard that the lyrics telop appearing in the ending theme is actually a production that you wanted to sing with the audience at the venue. 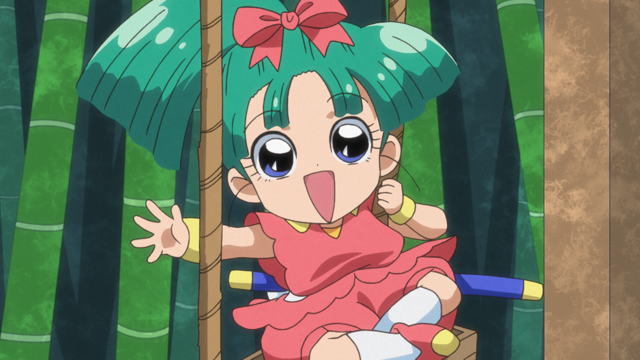 ──Finally, please give a message to your fans about the future of “Mashin Hero Wataru”.
Ikura: The relationship between Toraoh and Shoryuko remains a mystery, so I’d like you to spin off that (laughs). It’s a work that is loved by everyone, so I’m sure there are people who were watching it at the time and would like to write something like that. After all, I want to watch and play a drama as an actor.
Tanaka: Doakuda, Doakuda, Ankokuda, and this time Doakuda. I feel like I can continue with “Mashin Hero Wataru” as much as I want (laughs). Of course, we want to follow “Wataru”, but it’s impossible if the customers don’t want it. So if you support me, I can do as much as I want, including Ikura.
Ikura: It’s an era when both good and bad things spread (buzz), so I think that Dobazuda is very modern, but I think that a lot of evil will continue to appear in the future.
Tanaka: Thank you for your continued support.
Ikura: If you wish, it will come true.
(Interview / text: Kiri Nakazato)
[Movie information]
■ Mashin Hero Wataru Wataru Seven Souls Ryujinmaru -Reunion-
・ Screening theaters: Open to the public at 34 theaters nationwide