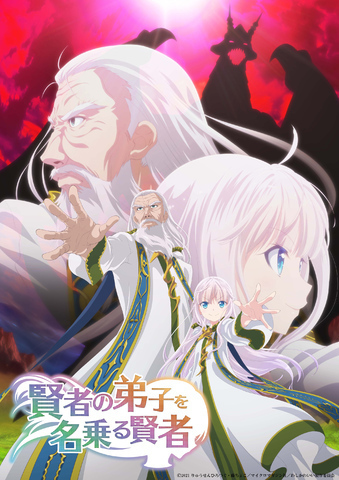 Winter animation “Sage who calls himself a disciple of the sage” Shouta Aoi’s additional character, dubbing report manga, new PV released!
Additional characters and dubbing report manga have been released from the TV anime “Sage who claims to be a disciple of the sage”, which will start broadcasting on January 11, 2022 (Tuesday).
“Sage who claims to be a disciple of the sage” (Novel: Ryusen Hirotsugu / Illustration: Fuzichoco) is a beautiful girl reincarnation adventure fantasy novel that has been published in GC Novels since 2014. One day, the main character, Kan Sakimori, who was playing as a veteran sage “Dumbulf” in an online game, became a pretty girl and was blown into the world of the game.
⇒ Winter animation “Sage who calls himself a disciple of the sage” Episode 1 Synopsis & Preceding scene cut released! Broadcast starts on January 11 (Tuesday)
https://japaneseanime3315.seesaa.net/article/485126235.html?1641612462
The TV animation will finally start broadcasting on TOKYO MX and others from 24:30 on January 11th (Tuesday). Today, an additional character and cast, and a dubbing report manga by the author of the comicalized version, Mr. Suemitsujikka, have been released.
The 4th PV is also open to the public, so please take a look before the broadcast.
[Additional characters]
■ Creos (CV: Shouta Aoi)
A beautiful young man acting on behalf of Dumblef.
He is the real top of the Summoning Tower. He continues to pledge allegiance to Dumblef and acknowledges the high abilities of his disciple Mira.
He is also a talented summoner and a teacher at the Archaite Academy.
▼ How hot is the overflowing site ……⁉
The newly drawn dubbing report manga is on the official website
https://kendeshi-anime.com/special/
[PV 4th]
https://www.youtube.com/watch?v=prrpACT8kc0