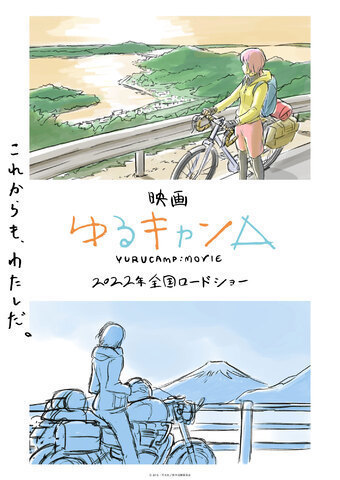 Movie “Yurucamp △” 2022 National Road Show! Concept visual release!
The concept visual has been released from the movie “Yurucamp” whose production has already been announced.
“Yurucamp” is a popular work that gently depicts how high school girls enjoy their outdoor life, camping and cooking outdoors in Yamanashi Prefecture. The first period of TV animation in 2018 became popular, and the spin-off work “Heya Can △” was broadcast from January to March 2020, and the second period “Yurucamp △ SEASON 2” was broadcast in January 2021. Broadcast started.
⇒ “Yurucamp △” Interview with Yoshiaki Kyogoku ──We packed all the charms of the camp atmosphere, food, and hot springs with location scouting!
https://japaneseanime3315.seesaa.net/article/485106746.html?1641475621
⇒Click here for the animation movie screening schedule
The TV animation “Yurucamp △ SEASON2” will finally reach its final episode from today.
It has been decided that the movie “Yurucamp”, whose production has already been announced and is waiting to be released, will be a national road show in 2022. The director is Yoshiaki Kyogoku, the script is Jin Tanaka and Mutsumi Ito, and the character design is Mutsumi Sasaki. And the animation production will be delivered by C-station, and the production staff will be delivered by familiar members as in the previous series.
In addition, to commemorate the decision on the release date, a concept visual using a part of the image board drawn by director Yoshiaki Kyogoku will be released. Pay attention to the atmosphere of the two, which is a little different from the previous series. Look forward to the follow-up to the movie “Yurucamp”.
▼ Movie “Yurucamp △” Concept Visual