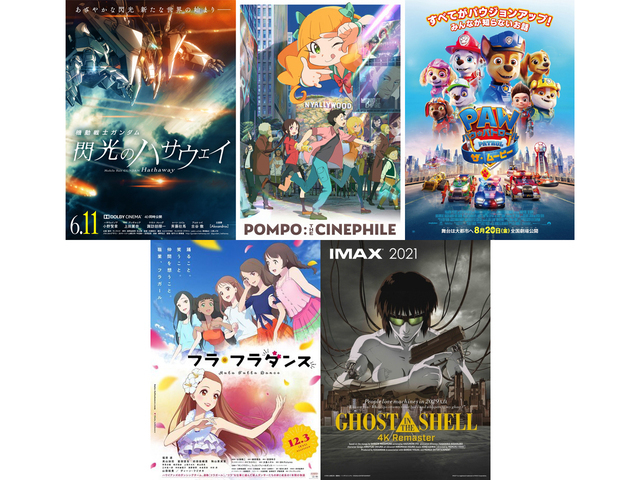 2021 Featured Anime Movie Review Looking Back on Anime Writer [Anime Column]
A writer who has watched almost all the animated movies released in 2021 looks back on the featured works from the titles currently being screened or the packages are on sale! Twelve years after “Char’s Counterattack”, the stage is “Mobile Suit Gundam: Hathaway of the Flash”, the 35mm film project is also talked about “Movie-loving Pompo-san”, the movie version of the dog rescue corps “Pow Patrol The Movie”, a newcomer We have picked up 5 works, “Hula Hula Dance” which depicts a year of Hula Dancer, and “GHOST IN THE SHELL / Ghost in the Shell 4K Remaster Edition” where Mamoru Oshii’s work released in 1995 will be screened at IMAX.
Mobile Suit Gundam: Hathaway of the Flash 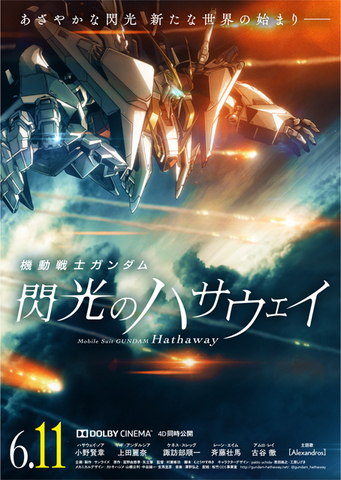 When it comes to the title of Gundam’s latest work, the Universal Century, which is the stage of the first work, the viewer will inevitably be aware of the connection with successive series. With that in mind, it can be said that Hathaway’s depiction of staring at the heroine’s hair fluttering in the wind was sufficient to remind us of the first episode of “Gundam Reconguista in G.” I wonder if that cut is a statement of determination to inherit the work from Yoshiyuki Tomino’s novel.
I don’t know if that’s the case, but the scene of the urban warfare in the middle of the mountain is a thorough depiction of how humans on the ground involved in the aerial warfare of mobile suits suffer. In the first episode of “Mobile Suit Gundam”, it will lead to a cut in which the cartridge case of the Zaku machine gun falls. The action that progresses in the dark while suppressing the light as much as possible is the result of color development.
The expression conscious of weightlessness on the shuttle shuttle at the beginning is also impressive. I’m glad that he shows his ability casually, such as Colonel Kenneth’s insight to detect an incident just by blocking the light of the window, and Hathaway’s spine strength that firmly catches the flight attendants blown away by the hijacking. I would like to wait for the release of Part 2. 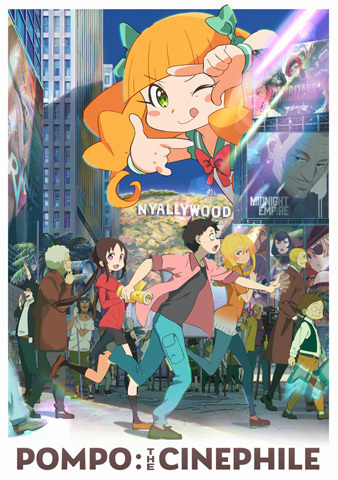 After the movie was released, crowdfunding was carried out to make it into a 35mm film, and in December this work was unveiled to people other than supporters. In the case of modern animation, where cels and cameras disappeared from the production process, I was quick to think that digital would be the better screen, but I was made to change that perception by actually seeing the film. .. The outline color tress, which is a characteristic of “Pompo-san,” bleeds a little and becomes a soft taste by passing it through the film, and you can enjoy a different beauty. Speaking in a cinephilia style, I was surprised at the difference that people who have not experienced the 35mm film version would want to say, “I’m looking forward to it.”
In the last part of the main story, a lot of time is devoted to editing scenes that are not in the original, and the new director cuts down dozens of hours of material and finally completes one movie. The horror of the ending that the hero who has been able to cut off unnecessary things for the whole is commended by the authority has no choice but to tremble, but at that time I remember the “New Cinema” mentioned in the work. Paradise “. There must have been a scene where the film was cut in this movie as well. The work was dismissed by producer Pompo as “disliked”, but the reason is not the length of the screening time, but the story that the cut film contained irreplaceable things for the director. It may be because it was inconvenient. 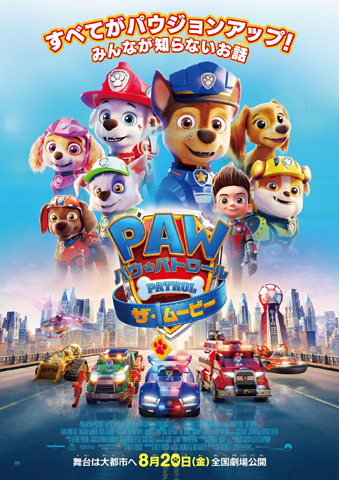 In TV animation, the scope size, which is longer than the 16: 9 aspect ratio, is used as a promise to show that the scene currently being played is dramatic. Therefore, when I hear the scope size in theatrical animation, I am wary that it may be a movie if I make it horizontally long for the time being, but this work is unrelated to such an easy idea. Is clear from the sequence at the beginning.
An incident suitable for a horizontally long screen occurred in which a large tank truck caused an accident on a huge bridge. The composition is also decided to be conscious of the top and bottom to rescue the tank truck that is about to fall into the river by making full use of helicopters and ships, and it is ideal for introducing a unique world view that rescue members are puppies. Although there are some flaws that cats cannot overlook, such as drawing a dog as a hero and a cat as a heel, they are drawn in at once.
The attitude of not affirming the harsh working style that damages the mind and body is also a good impression. Encouraged by Chase’s hard work toward the mission while facing the trauma that was once abandoned by the owner, he longs for Kent’s ideal boss who gently reaches out to him, but among the characters he is no longer a villain, Rival The presence of is overwhelming. Rival, who became the mayor of an electoral fraud, destroys a model of a library, museum, and park (where he can play with dogs) simply because it’s boring, and makes a scent of its abolition in front of the public. He would learn the obvious lesson that a person trying to crush public facilities shouldn’t be the chief in a kids anime … 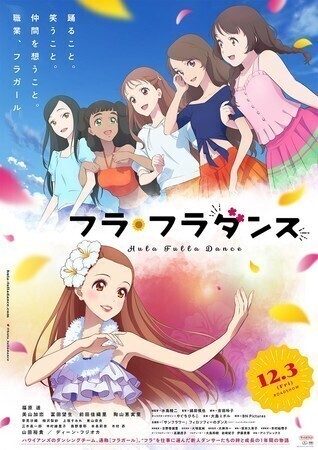 An original youth anime of five girls who got a job at Spa Resort Hawaiians and became new hula dancers after graduating from high school. The main character, Natsunagi Hiwa, who has no experience in hula, walked with her strange synchronizations, such as not being good at maintaining her style and not being able to make her smile well1 Draw a year. Although he made an unprecedented blunder on the first stage, he was given the disgraceful catch phrase “the most disappointing newcomers in history”, but with the efforts of himself and the help of those around him, Hiwa and his friends are full-fledged. I will grow into a dancer.
While being moved by the five people who show off the perfect hula on the stage, it also makes me feel lonely, suggesting that the place called Spa Resort Hawaiians is not a safe place for Hiwa and others, and that farewell will come soon. Because it is. The senior employees who have supported us so far move to the new world for their own reasons, and it is revealed that they themselves have different dreams and goals.
With that in mind, the work of Reiko Yoshida, who wrote the script for this work, is “Movie K-ON!” The heroes who live hard now knowing that they will be separated someday are drawn. Even in “Girls und Panzer” where high school girls fight in tanks, remember that there was some loneliness in the second half of the game when their friends dropped out. A work that makes you want to leave yourself to such a comfortable feeling of loneliness. 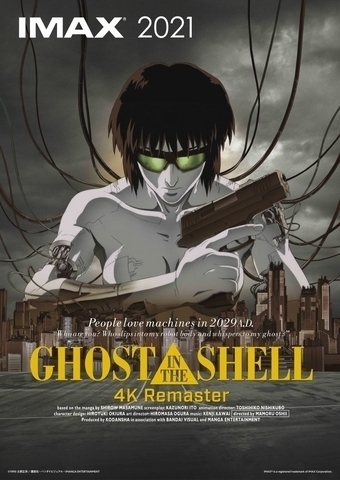 When it comes to digital remastering, people tend to focus on the beauty of the images, but I realized again that “Ghost in the Shell” is rather attractive because it has a complex mix of cuts with different image quality. In the main story, subjective images seen from the viewpoint of characters and surveillance cameras are inserted in detail. Even if you don’t like remastering, you will notice that there is noise like scanning lines. Batou has such an exaggerated eye, but the resolution is about the same as that of a CRT TV, and I can’t hide the shock from the fact that a quarter of a century has passed since the movie was released, but basically the subjective image is drawn as a rough image. It was.
The only exception is the final part of the main story, which is a long turn of about 45 seconds depending on the subjectivity of the element. When you zoom in on her mirror, you can see the girl sitting on the sofa, but the figure is drawn with a different “real” and delicate touch, and in the next cut it may return to her original texture. It leaves a big impact. She says that Batou, who appeared late, is a body of a dark route prepared in a hurry, but such a prosthetic body cannot have a higher-performance eye than Batou. That subjective image may be a sign that the element has been released from the constraints of the body and has changed into an entity that sees the world from a different perspective than we, the audience. It became a remaster that can be reconfirmed that “Ghost in the Shell” was a story about the texture of the video.