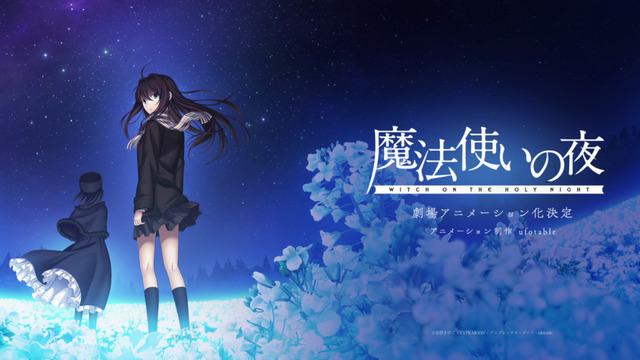 Announcing theatrical animation of the visual novel game “Mahoutsukai no Yoru” (Original: Kinoko Nasu, TYPE-MOON). For animation production, many TYPE-MOON works such as “The Garden of Sinners”, “Fate / Zero” and “Fate / stay night [Heaven’s Feel]” are animated, and ufotable is producing the animation “Kimetsu no Yaiba” currently being broadcast. Works on.

Along with this announcement, the official website and official Twitter (@mahoyo_movie) have opened. In addition, Teaser Visual & Teaser PV has also been released. The PV is as short as about 34 seconds, but you can see Aoko Aozaki and Yuzuru Kuonji. The voice actors and the release date have not been disclosed at this time.
“Mahoutsukai no Yoru” is a visual novel game by TYPE-MOON. The scenario was created by Kinoko Nasu, the creator of “The Garden of Sinners” and “Fate Series,” and originated from his unpublished novel. In addition, the graphics are handled by Hirokazu Koyama, who has been involved in the creative of TYPE-MOON works for many years. How will this work, which has gained a lot of attention as an orthodox “visual novel”, be animated? I would like to expect a follow-up report.
《Animeanime》