(C) Yoshinobu Nishizaki / Space Battleship Yamato 2205 Production Committee
The preview video and main visual of “Space Battleship Yamato 2205 New Departure After Chapter -STASHA-“, which will be screened in theaters from February 4, 2022, have been released.
The latest work of the reboot version “Space Battleship Yamato” series “Space Battleship Yamato 2205 New Departure” is a completely new work of all two chapters with the motif of the TV special “Space Battleship Yamato New Departure” broadcast in 1979. In 2205 AD, three years after the battle with the White Comet Empire, Space Battleship Yamato, who welcomed Susumu Kodai (CV: Daisuke Ono) as the new captain, confronts the mysterious enemy Desaliam. “Previous Chapter -TAKE OFF-” was released in October.
This notice composed of new cuts contains important scenes that approach the core of the story, and the last enemy Meldarz (Takaya Kuroda) drawn as a silhouette in the previous chapter also appears.
As the main visual, in addition to the ancient hero, the figures of Abelto Dessler (Koichi Yamadera) and Stasha (Kikuko Inoue), who hold the key to the story, were drawn by Nobuteru Yuki, who is the character designer. In addition, the main copy of the same work is a story development that “I did not want to be an adult. The sin and punishment of the holy star revealed at the end of the fierce battle. What is the last decision made by men who lost their lives?” It is a suggestion.
Advance tickets (Mubichike Card) with B2 posters using the main visual will be on sale from December 31st at screening theaters and major websites nationwide. The price is 1600 yen. 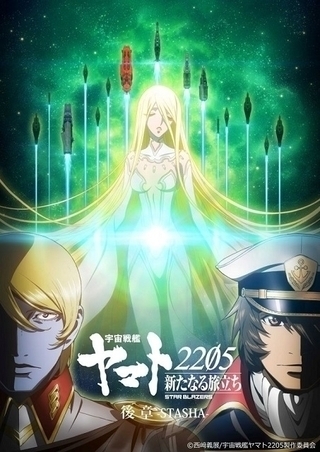