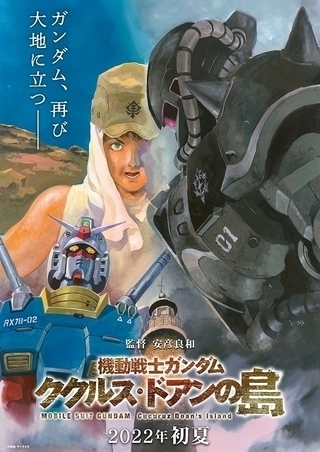 (C) Sotsu / Sunrise
The release date of the theatrical animation “Mobile Suit Gundam: The Island of Kukurusu Doan” has been decided in early summer 2022, and super special news footage and super teaser visuals have arrived.
Yoshikazu Yasuhiko, who participated in the 15th episode “Kukurusu Doan no Shima” of the TV anime “Mobile Suit Gundam” broadcasted in 1979 as an animation director and character design, will take a new approach as a director himself. Reanimate. In the original “Kukurusu Doan no Shima”, he escaped from the Zeon army with Amuro Ray, a boy who became a pilot of RX-78-02 Gundam, a new mobile suit of the Earth Federation Forces, and hated the fight to wash blood with blood. The sorrow of the war was depicted through the exchange of Kukurus Doan, a former MS pilot who lives on an isolated island with war-damaged orphans.
The super-special news footage depicts Gundam “standing on the ground” and includes a scene in which the transport plane GUNPERRY flies over the island where the story is set. In the super teaser visual, along with the kitchen copy “Gundam, stand on the ground again”, Amuro and Gundam, the towering lighthouse, and Zaku, a mass-produced mobile suit of the Zeon army, are drawn by Yasuhiko himself. Has been done.