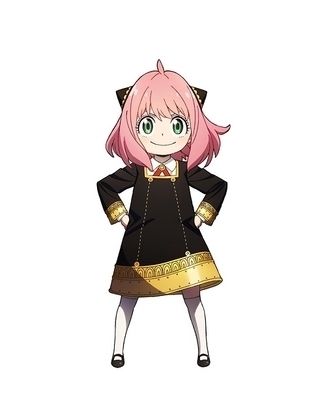 Anya (CV: Atsumi Tanezaki)
(C) Tatsuya Endo / Shueisha SPY x FAMILY Production Committee
It has been decided that the broadcast of “SPY x FAMILY”, which is a TV animation of Tatsuya Endo’s spy action comedy manga, will start in April 2022 on TV TOKYO and others. Produced as a split 2 cool work. In addition, Atsumi Tanezaki and Saori Hayami will also appear. The second promotional video has also been released.
The original, which has been serialized in Shueisha’s web comic magazine “Shonen Jump +” since March 2019, is a psychic spy, Twilight, who calls himself Lloyd Forger and his wife, Yor, a killer. , Draws a figure of living as a general family without revealing their identities and abilities, with Anya, a supernatural power, as a daughter.
Yoru (CV: Saori Hayami)

(C) Tatsuya Endo / Shueisha SPY x FAMILY Production Committee
Tanezaki plays the role of Anya, who has the ability to read the hearts of others and tries to help Lloyd, and Hayami gets married to Lloyd because she wants to keep her younger brother relieved and not be suspicious of others. In charge of the role of Yor. Together with Takuya Eguchi, who plays the role of Lloyd, the main cast who plays the Forger family is complete.
The second PV, which reveals the “Operation Owl (Strix)” ordered by Lloyd, contains the voices of three members of the family. At the end, Anya is comically depicted with a surprised expression when she learns from her heart that Yoru is a hitman.
Below are comments from Tanezaki and Hayami.
[Atsumi Tanezaki (role of Anya Forger)]
My name is Atsumi Tanezaki and I am in charge of the voice of Anya Forger.
While reading her original story, how many times did her cute girlfriend make me sick, and how many times did she make me laugh so much that I was hungry? She is happy and honored and still unbelievable, but I would like to take good care of her favorite girlfriend. She will do her best to deliver something that is “exciting … !!”.
Thank you for your support !!!
[Saori Hayami (role of Yor Forger)]
Being a member of the “SPY x FAMILY” family, which is loved by everyone, is filled with great joy, fun, and a feeling of excitement.
I will do my best to make a nice dubbing, including the front and back sides. I can’t wait for the recording from now on …!
Please look forward to the broadcast! 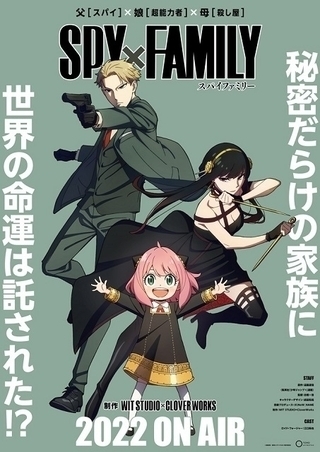 8
Broadcast time 2022 spring animation
Production company
WIT STUDIO, CloverWorks
Staff information
[Original] Tatsuya Endo (“Shonen Jump +” published by Shueisha) [Director] Kazuhiro Furuhashi [Character design] Kazuaki Shimada [Music produced] (K) NoW_NAMESPY x FAMILY
Synopsis
An era when countries around the world were engaged in fierce information warfare under the surface of the water. East (Ostania) and West (Westeris) have been in the Cold War for more than a dozen years. The brilliant spy , who belongs to the West Division vs. East Division , is there to find out the trends of Donovan Desmond, the president of the National Union Party of the East, a dangerous person who threatens East-West peace. You will be tasked with a top secret mission. Its name is Operation . The content is “Create a family within a week and infiltrate the social gathering of the prestigious school where Desmond’s son attends.” decides to make a family by dressing as a psychiatrist Lloyd Forger. However, his daughter, Anya, whom he met was a psychic who could read the heart, and his wife, Yoru, was a hitman! Because the interests of the three people were in agreement, they would live together while hiding their true identity.
cast
Lloyd Forger: Takuya Eguchi Anya Forger: Atsumi Tanezaki Yoru Forger: Saori Hayami
Related Links
[Official site] http://spy-family.net/