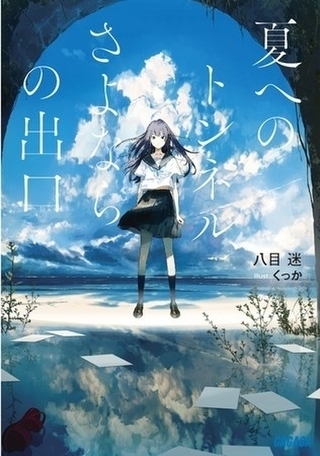 It has been decided that Hachimoku Mei’s science fiction youth novel “Tunnel to Summer, Goodbye Exit” (published by Shogakukan) will be made into a theatrical animation and will be released in the summer of 2022.
This work won the Gagaga Award and the Jury’s Special Award at the 2019 “13th Shogakukan Light Novel Awards”. Set in a rural town facing the sea, Kaoru Tono, a high school student who lost his beloved sister and lives with a gap, and Anzu Hanashiro, a transfer student girl who has a certain problem, formed a cooperative relationship and said, “I get old when I go inside. Instead, you can get what you want. ”The legendary urban“ Urashima Tunnel ”is used to transcend time and space and try to fulfill each wish. “Monthly Sunday GX” (published by Shogakukan) and others are serializing the comicalize “Tunnel to Summer, Goodbye Exit Gunsei”.
The movie version will be directed by Tomohisa Taguchi, who worked on “Akudama Drive” and “Digimon Adventure LAST EVOLUTION Kizuna”, and CLAP of “Movie Lovers Pompo-san” will be in charge of animation production.
Below are the comments from the original author.
[Hachimoku Mei (original author)]
“The Tunnel to Summer, the Exit of Goodbye” is a story that was born by hitting the key with all one’s might while feeling frustrated by the passage of time. I never dreamed that the heart-wrenching feelings of those days would make a movie in this way. Director Taguchi and all the staff are passionate about the production. As a spectator, I can’t wait to see the movie complete.
Work information

Updated December 16, 2021
Work information Event information
Tunnel to summer, goodbye exit
Theatrical release date 2022
Click here for screening information and reviews Click here for screening information and reviews
Form movie
Production company
CLAP
Staff information
[Original] Hachimoku Mei (“Gagaga Bunko” published by Shogakukan) [Original illustration] Kukka [Director] Tomohisa Taguchi Tunnel to summer, goodbye exit
Synopsis
Kazaki, a rural town facing the sea. One morning on a summer day, Kaoru Tono of High School 2 heard an urban legend called “Urashima Tunnel”. It was a fairytale tunnel where you could get whatever you wanted instead of getting old. That night, Kaoru happens to discover a tunnel that looks like a “Urashima tunnel.” He lost his beloved sister Karen in an accident five years ago, and he comes up with something in front of the tunnel. ――If you enter the “Urashima Tunnel”, you may be able to get Karen back. Kaoru started the tunnel inspection by himself after school, but there was a person who secretly followed him. Apricot Hanashiro, a transfer student. She is a floating figure in her class and is interested in Kaoru. The two form a cooperative relationship to get what they want from each other …