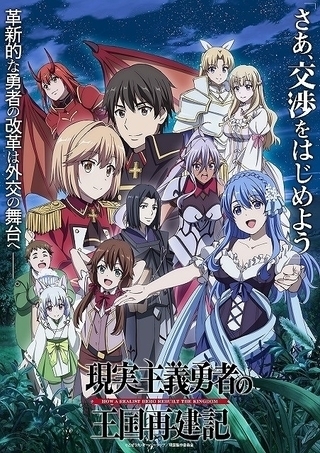 Key visual depicting the main character Kazuya and her friends
(C) Dojyomaru / Overlap / Current Country Production Committee
The book PV and key visuals of the TV anime “How a Realist Hero Reconstruction Part 2” have been released.
This work is an animation of a light novel that exceeds 1.5 million copies in the series. Kazuya Soma (Soma Kazuya / CV: Yusuke Kobayashi), who was summoned to another world as a hero, was given the throne of the Elfrieden Kingdom and was leaning toward it by making full use of his rational spirit and modern knowledge. Rebuild the system of. In the first part, the focus is on domestic affairs, and in the second part, Kazuya will face diplomacy with neighboring countries while the wounds of the civil war cannot be healed.
In the PV, with “REAL-EYES” sung by Inori Minase, who plays the role of heroine Lithia in the same work, superscientist Ginha Maxwell, slave trader Ginger Camu, third-eyed doctor Hilde Nog and others. The appearance of a new character appearing in the latter half of the story is reflected.
“How a Realist Hero’s Kingdom Reconstruction Part 2” will start broadcasting on January 8, 2022 on TOKYO MX, BS11 and others. At the same time, it will be exclusively distributed by the distribution service “FOD”.