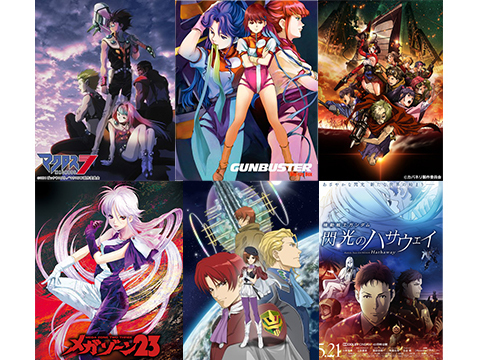 “Mikimoto Haruhiko Anime Work Popularity Vote” Results Announcement! “Kabaneri” and “Macross” develop a dead heat competing for 1st place!
The official special voting project of Akiba Research Institute “Haruhiko Mikimoto Anime Work Popularity Vote” was held from November 19th to December 3rd, 2021. Let’s announce the result.
Before looking at the results, I would like to briefly explain about the person named Haruhiko Mikimoto, as some may not know it. Haruhiko Mikimoto is a master of character design who has built a reputation in the Japanese animation world that can be called a “legend”. The name suddenly became known in Studio Nue’s “The Super Dimension Fortress Macross” (1982), along with the cult popularity of the characters who appear in Macross, especially the heroine Lynn Minmay. Was known to the world, and many anime fans were captivated by the touch of the character drawn by Mikimoto, which had a slightly larger number of lines at that time. After that, “Super Dimension Century Augustus” (1983), which was broadcast as a program after Macross, “Megazone 23” (1985), a sci-fi work that prevailed as an OVA, and OVA “Megazone 23” (1985), which is known as a successful work of Gainax. Aim for the top! ”(1988) and was in charge of character design, and through these 80’s animations, its fame became solid.
After that, after 2000, it seems that it has been away from the animation industry for a while, but in recent years, it appeared as a character draft in “Kabaneri of the Iron Fortress” (2016) produced by WIT STUDIO. In addition, this year, he is also active as a character design draft for “Mobile Suit Gundam: Hathaway of the Flash” (2021), and it is a new memory that greatly pleased the anime fans of the past.
Which of the anime works that Haruhiko Mikimoto participated in would be the one that Akiba Soken users liked. First, let’s take a look at the results of the 10 best
1st place: “Kabaneri of the Iron Fortress” … 38 votes
2nd place: “The Super Dimension Fortress Macross” … 37 votes
3rd place: “Tytania” … 31 votes
4th place: “Aim for the top!” … 22 votes
4th place: “Reika” … 22 votes
6th place: “Super Dimension Century Augustus” … 14 votes
7th place: “Mobile Suit Gundam 0080: War in the Pocket” … 13 votes
8th place: “Macross 7” … 11 votes
9th place: “Megazone 23” … 6 votes
10th place: “Super Dimension Century Orguss 02” … 4 votes
As you can see from this result, the two works competed for the lead by one vote. “Kabaneri of the Iron Fortress,” known as Miki’s recent work, won first place by such a small margin. There was only a work broadcast in 2016, so it must have been one that many users will remember. Also, unlike the 80’s animation that occupies most of Mikimoto’s work, in this work, which is a modern animation work with technological innovation based on CG, Mikimoto’s original line is many and fine character design is rather real. It also seemed to emerge. In addition, this work is a tag work between WIT STUDIO who succeeded in animating “Attack on Titan” and director Tetsuro Araki, and with the addition of Mikimoto’s character draft, it became a really impressive work. Let’s add.
In second place, who played such “Kabaneri of the Iron Fortress” and dead heat, “The Super Dimension Fortress Macross”, which is the representative of Mikimoto animation, was attached. It’s a very famous work, so I don’t need to talk much about it, but it’s a work that changed the history of Japanese animation in many ways. A love story spun in a combination of the two elements of war and everyday life, the protagonist mecha that transforms from the shape of a real weapon, the aliens that are different in size from humankind, the existence of a giant space battleship, and above all. And the existence of “song”. It goes without saying that one of the major reasons for the success of this monumental work was the existence of a character drawn by Mikimoto that was different from the previous anime.
Behind the scenes of these two works playing the dead heat, it was “Tytania” (2008) that steadily voted and ranked in 3rd place. It may be a slightly minor work, but it is a space opera-like work based on Yoshiki Tanaka, who is known for “Legend of the Galactic Heroes,” and is a legendary work directed by Noboru Ishiguro, who worked on Macross. In this work as well, Mikimoto participates as a character draft, adding flowers to the magnificent world view of this work.
In addition, in 4th place, the monumental sci-fi work “Aim for the Top!” Produced by Gainax ranked in, and Ichiro Itano and Mikimoto (character design) who firmly established their name as animators in charge of mecha at Macross. The OVA work “Reika-rayca” (2001), which was produced in collaboration with the company, also ranked in 4th place, and the voting result was quite enthusiastic.
For other voting results, please see the following page.
Haruhiko Mikimoto Anime work popularity vote [Special project]
https://japaneseanime3315.seesaa.net/article/484858392.html?1639791413