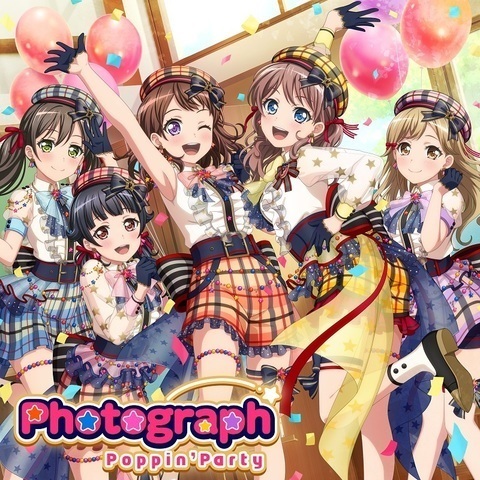 “BanG Dream!” Band 4 groups release new singles all at once! Thorough review of the songs that marked the beginning of 2021! [Monthly Voice Actor Artist Bulletin January 2021 Issue]
This serialization that recommends the works of voice actor artists in a monthly publication.
January 2021 may have been an enthusiastic month from the beginning of the new year for “Band Dreamer”, a fan of the media mix content “BanG Dream!”. That’s because this month, four sets of real band single CDs from the film were released in relay format for four weeks. I would like to review all the singles this month so as not to miss the big wave caused by such “BanG Dream!”.
Poppin’Party 16th single “Photograph”

Of particular note is the power of words written by novelist Ko Nakamura that captures the hearts of listeners. I’m sorry to say that it was the story of the writer in charge from the beginning, but in this title song “Photograph”, I was reminded of the scene descriptive power of Mr. Nakamura’s lyrics. Here, I would like to quote the song from the same song below.
Rabbit baby born next week
Too sweet canned coffee in the school building
School cafeteria menu Curry school? Pasta school?
Your sigh that I met at this gate
“Photograph” is a song about Poppin’Party’s everyday happiness, but from a slightly mean angle, it’s a rather surprising song. However, as I listened to the music, I understood the theme as mentioned above without being told, a breeding hut, a vending machine and a cafeteria where I enjoyed chatting without tears, a school gate in the cold winter, and so on. The place where you live will be visualized naturally (here, there is a point that the euphemism of “Kimi’s sigh” that you meet at the school gate also brings tears to your eyes). By overlapping with the nostalgic and warm tracks and the song splits sung by each member, the series of such memories brings out more scenes than each word and sound has, like a movie. Let’s go.
In addition, the guitar cutting that speeds up the tempo in the chorus makes you imagine the steps that the members earnestly run through youth, and at the end, there is a promise that “one of the best” will be left in the future. How many albums will be produced when they put down the camera someday?
On the other hand, the coupling song “Open and Dream!” Is based on the theme of “toys”. There is no age limit for “glittering” hearts. It’s a song that makes you feel the playfulness of Popipa, not forgetting “TEENAGE VIBE”.
Roselia 11th single “ZEAL of proud”

Regarding Roselia, I would like to introduce the two recorded songs together. The point that is common to both songs and differentiates them from other bands is that they are message songs that push their backs while clearly conscious of the existence of listeners.
The title song “ZEAL of proud” is based on the event story “This heart-filling warmth” released in the smartphone rhythm game “Bandri! Girls Band Party!” (Garpa) in the fall of 2020. After fulfilling their goal of performing at the festival, their feelings for the next stage they should aim for are sung high. Also, in the coupling song “Blessing Chord”, the content will “prove existence” that you can be as you are. It’s no coincidence that the phrase “OK” appears in both lyrics.
In addition to “OK”, the two songs mentioned above have the same word “Light”, but the appearance of them overcoming hardships and aiming for a bright place has a solemn and dark impression. Gothic rock-metal sound is what clearly conveys the contrast. Although the sound itself is intense, it would be a shame for fans to say that Roselia is only when you have a warm heart and gently welcome others. I think this single is a single that clearly shows the spirituality of such a band.
Of course, in order to complete such a song, the band that is no longer ashamed of the singing voice of Aina Aiba (Vo / Yukina Minato) who pierces her feelings straight and the title of “Ability group band” is no longer reliable. There was a performance of the corps. Unfortunately, the event was canceled, but their ability can be seen from the fact that they were booked at “rockin’on presents COUNTDOWN JAPAN 20/21” at the end of 2020.
As an aside, standing on the stage of “COUNTDOWN JAPAN”, which is the “stage of longing” for the cast, is a medium that crosses over 2D and 3D, because it gives a feeling of being sloppy with the story of “Garpa” mentioned above. It can be said that it is unique to the mix.
RAISE A SUILEN 6th single “mind of Prominence”

The title song “mind of Prominence” is a song that uses a heavy metalcore-like track. From chorus work like “BanG Dream!” To voice effects by vocoders to dance music-like claps, you will be overwhelmed by the arrangements that have been exhausted. As a final touch, the long tone at the end of the chorus released by Raychell (Vo & Ba / layer role) seems to emphasize the musicality of the band that is unrivaled, as if saying “power is everything”. is.
And the coupling song “JUST THE WAY I AM” has been a big topic among fans since the release of the audition sound source. The reason is that her singing part occupies most of the song so that it seems that the provocative rap by Risa Tsumugi (DJ / Tutu) is the main part of this song. Armed with a high-tone voice that is perfect for high-flying tilts, it is possible to kick off with humor while mocking the surrounding obstacles because it is a proprietary role of Mr. Spinoki, and it is also a character song. It can be said that it is the highest degree of perfection.
Also, from the point of view of sound, it seems that the intro with the movement that a heavy beat rushes to the filtered place at once, and the interlude that folds into the noisy with the synthesizer with distortion, etc. .. The sound that can be said to be the most “rough person” of “BanG Dream!” Seems to have been further refined through this single.
Morfonica 2nd single “Bloom Bloom”

The title song “Bloom Bloom” is based on the event story “Flower Light Symphony” released at “Garpa” in the spring of 2020. In the same story, Morfonica members will have a cherry-blossom viewing with senior bands including Popipa.
In the first place, Morfonica is a band that started with the desire of Mashiro Kurata (Vo / CV: Amane Shindo) to “change” from her ordinary self, but she is a member of other bands even in this cherry blossom viewing because of her withdrawal personality. On the other hand, I couldn’t deal with it with courage. “Bloom Bloom” is a song that traces the growth from her worries to opening her heart to others. Compared to the time of the 1st single “Daylight”, which shook her shoulders and took the first step, the same act of “squeezing courage” will give a different impression.
Also, Morfonica has just been formed in the spring of 2020, so I think every day, including the members of the real band, is full of innocent stimuli. “Bloom Bloom” is based on the characteristic symphonic rock, but has a light and open sound and a singing voice that leaves Shindo’s pop lingering sound. That kind of “feeling that your world expands no matter what you do” may be behind the song. Even considering the above-mentioned conflict of Mashiro and the process of her growth, it can be said that it is a perfect song for the season of encounter, where the coming warm spring will be long-awaited from now on.
The coupling song “flame of hope” is also likened to the story of “Garpa”. This is a floor banger that is suitable for the color of the burning flame, and you can enjoy a different vector even if it is derived from the same “Garpa”. I will omit it in this article, but the back story of the song is also interesting, so please check it with your own eyes.
(Sentence / Kota Ichijo)