The third movie version of "Hiroaka", released on Blu-ray & DVD with a newly written novel Draws a story hidden in the end roll 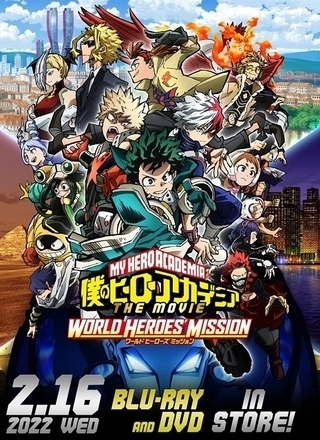 (C) 2021 “My Hero Academia THE MOVIE” Production Committee
(C) Kohei Horikoshi / Shueisha
It has been decided that a newly written novel will be included as an additional benefit of the Blu-ray and DVD Plus Ultra version (luxury version) of the third movie version “My Hero Academia” “My Hero Academia THE MOVIE World Heroes Mission”. ..
“My Hero Academia THE MOVIE World Heroes Mission” released in August this year recorded 2.44 million spectators and 3.37 billion yen in box office revenue. The movie version “My Hero Academia” became the biggest hit in history. In order to save people from the individuality factor-induced bombs (idiot trigger bombs) set up in each country by the mysterious organization “Humarise” that aims to destroy “individuality” holders, including Deku (Izuku Midoriya / CV: Daiki Yamashita) As members of the world-selected hero team, the students of the hero department of Yuei High School will challenge the bomb recovery mission where the time limit is approaching every moment.
The newly written novel was written by Henri Eiji, who worked on the novelization “My Hero Academia Male English White Paper”. The story of the members of the 1st grade A group of the hero department of Yuei High School, the movie version of the original character Lodi Soul (Ryo Yoshizawa), and the pictures of Lodi’s younger brother and sister, which was projected on the end roll of “World Heroes Mission”. It will be revealed.
In addition, the jacket visual of Plus Ultra version was also released. On the surface of the special three-sided case, Deku who came to save the world and Lodi who runs a carrier in the foreign land, the city of Oseon, which was the stage of the “World Heroes Mission”, are moving. It is drawn with a feeling full of feeling. On the back side, Katsuki Bakugo (Nobuhiko Okamoto) and Shoto Todoroki (Yuki Kaji) who participate in the mission as members of the world selection hero team like Deku stand side by side.
Blu-ray and DVD of “My Hero Academia THE MOVIE World Heroes Mission” will be released on February 16th. In the main video, additional work has been done to some scenes since the theater was released. The PLUS ULTRA version, which includes special benefits such as the new animation “Departure” and event videos such as stage greetings at the time of theatrical release, and a 44-page special booklet, is 8580 yen for Blu-ray and 7480 yen for DVD. The regular version of the main disc only is 5280 yen for Blu-ray and 4180 yen for DVD.
Work information My Hero Academia THE MOVIE World Heroes Mission

Updated July 27, 2021
Work information Event information
My Hero Academia THE MOVIE World Heroes Mission
Theatrical release date August 6, 2021 (Friday)
Click here for screening information and reviews Click here for screening information and reviews
Form movie
Production company
Bonds
Staff information
[Original] Kohei Horikoshi [Director] Kenji Nagasaki [Screenplay] Yosuke Kuroda [Character Design] Yoshihiko Umakoshi [Music] Yuuki Hayashi My Hero Academia THE MOVIE World Heroes Mission
Synopsis
Humanize, a mysterious organization that aims to annihilate “individuality” holders around the world. A world-selected hero team has been formed to save people from the bombs that they set up in each country to cause the “individuality” to run away and lead to collapse. Professional heroes from all over the world and students from the hero department of Yuei High School, who were internships at the hero office, were convened to collect bombs in various places. Deku, Bakugo, and Todoroki, who are internships at the Endeavor office, are also wanted nationwide when they are involved in a certain incident while they are operating in a country far away from Japan! Along with Lodi, a boy who was a carrier who met in the wake of the incident, Deku and his friends were targeted by the police and a group of mysterious enemies (villains). A huge conspiracy begins to move in the shadow … And the criminal statement from the humanize leader, Flect Turn, reaches the world- “The time limit is two hours from now”. A countdown to the panic that occurs in each country and the impending world collapse. The hero team heads for the recovery of bombs in various places without regard for danger under the situation of desperation-
music
[Theme song] ASIAN KUNG-FU GENERATION “Empathy”
cast
Izuku Midoriya: Daiki Yamashita Katsuki Bakugo: Nobuhiko Okamoto Shoto Todoroki: Yuki Kaji Endeavor: Toru Inada Hawks: Yuichi Nakamura Flect Turn: Kazuya Nakai Pino: Megumi Hayashihara Lodi: Ryo Yoshizawa
Related Links
[Official site] https://heroaca-movie.com/

タグ: released on Blu-ray & DVD with a newly written novel Draws a story hidden in the end rollThe third movie version of "Hiroaka"