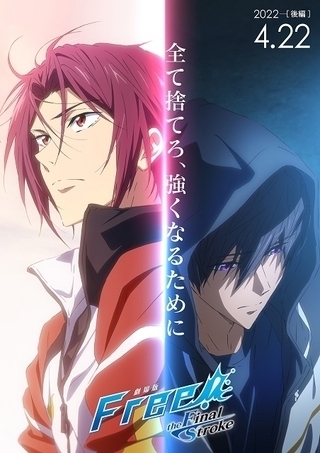 (C) Uncle Koji / Kyoto Animation / Iwatobi Town Supporters Association 2021
From “Theatrical Version Free! -The Final Stroke- Part 2” released on April 22, 2022, the 2nd special newsletter and the 2nd teaser visual have been released.
The “Free!” Series is a swimming youth story that was produced by Kyoto Animation and others, and a total of three TV series were broadcast from 2013 to 2018, and many theatrical versions were released. High school students Haruka Nanase (CV: Nobunaga Shimazaki) and Makoto Tachibana (Tatsuhisa Suzuki) founded a swimming club with the demolition of the swimming club they used to go to, and renewed their passion for swimming. .. The stage of the story was moved to Sydney, Australia, and the first part of “Free! -The Final Stroke-“, the final chapter of the story of Haruka, was released nationwide on September 17th.
In the second special report, while the telops “400m away”, “to the future”, “throw away everything”, “to become stronger”, and “the time has come” are played, Haruka’s tears are recorded. ing. The second teaser visual, along with a catch phrase “Throw away everything, to become stronger”, looks down in the dark while being illuminated by a faint light, and looks stunned in the dazzling brilliance. It is an illustration that contrasts with Rin Matsuoka (Mamoru Miyano) who raises it.
From December 17th, the second movie card with a clear file will be on sale at each screening theater. The clear file of the privilege is decorated with illustrations drawn by each character when he was a high school student, and due to the common “connecting” background, you can enjoy not only the second but also the first and third benefits side by side. can. The price is 1500 yen, and one of the eight types of benefits is randomly included.