Special Feature / Column November 22, 2021 (Monday) 19:00
[Edit G subculture bookshelf] 11th “COCOLORS” work Consideration and trivia for viewers who are squeezed into the mystery of the world 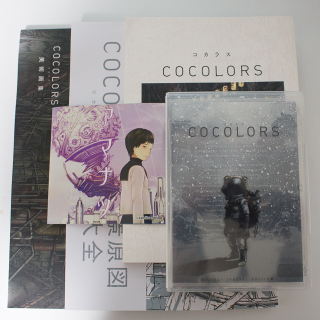 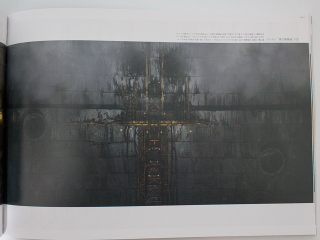 Upside down, background art of the funeral hall square (from “COCOLORS” art book, page 106)
See larger image
■ “OK” message pressed with three fingers
Immediately before reaching the surface of the earth, Fuyu drops the whistle in the middle of the escalator. To inspire Aki who couldn’t move forward, Fuyu pressed Aki’s back tightly with three fingers. As explained in Aki’s monologue immediately after the opening title, the meaning of the sound made with three fingers is “OK”. It is a production that conveys a message with a casual gesture, and the moment when the hearts of Fuyu and Aki communicate with each other without using words or sounds is beautifully depicted.
It was about the third time I watched it that I noticed this production while writing it as awesome (?). At first, it was shaken firmly, and it should have been a depiction of the whole body for the creator to the extent that Fuyu was using a whistle for this, but I did not notice it for a while, so maybe there is the same person. As soon as I wrote.
■ Shin-Ochanomizu Station and skyscrapers in Nishi-Shinjuku
The escalator that Aki and his friends climb to get to the ground is based on the escalator at Shin-Ochanomizu Station. You can see the plate that says “Shin-ochanomizu” where the escape from the underground facility is stippled.
Also, in the scene where the silhouette of the ground surface seen at the beginning of the opening title and the “sky ghost” inserted in the conversation between Aki and Shu destroy the ground, the skyscraper “Mode Gakuen Cocoon” with an impressive curved form You can also see the building that looks like a “tower”, and it can be seen that the area around Tokyo and Nishi-Shinjuku was also referred to.
■ Origin of “COCOLORS” “Amanatsu”
Kamikaze Doga and Director Yokoshima released a short film “Amanatsu” of about 14 minutes in 2009, and it is now released on the company’s YouTube channel. This is also an original work produced independently, and depicts the journey of a girl Amane and a robot who wish for the “end of the world” in the near future.
The relationship between the girl and the silent robot is reminiscent of Aki and Fuyu, and the depictions and impressions after appreciation are similar to “COCOLORS”. Director Yokoshima himself recalls in the Blu-ray booklet, “I noticed that there are many elements like the prototype of” COCOLORS “in terms of content …”.

タグ: [Edit G subculture bookshelf] 11th "COCOLORS" work Consideration and trivia for viewers who are squeezed into the mystery of the world