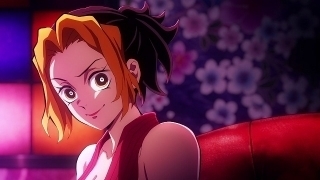 Maki (CV: Shizuka Ishigami)
(C) Koyoharu Gotouge / Shueisha / Aniplex / ufotable
An additional cast of the TV anime “Kimetsu no Yaiba Yukaku Hen” was announced in “Kimetsu TV” delivered on December 6th.
Shizuka Ishigami will play the role of Maki, Nao Toyama will play the role of Suma, and Atsumi Tanezaki will play the role of Hinatsuru.
The release of the illustration record collection of the anime “Kimetsu no Yaiba” has also been announced. More than 300 illustrations centered on ufotable’s “Tanjiro Kamado Ritsushi Hen” are included, and the cover illustration is drawn by Akira Matsushima, who is the character design and animation director. A4 size all color 120 pages for 1540 yen (tax included). It will be released by Shueisha on February 4, 2022.
The special to commemorate the start of the broadcast of “Kimetsu TV” featuring Natsuki Hanae, who plays the role of Sumijiro, and Katsuyuki Konishi, who plays the role of Tengen, is being archived on the Aniplex YouTube channel. The full comments by Ishigami, Higashiyama, and Tanezaki are as follows.
[Shizuka Ishigami (role of Maki)]
I’m Shizuka Ishigami, who will play Maki-chan, one of Tengen-sama’s brides!
I am very grateful that Maki was entrusted to me, and I feel that I will be tightened. The Yukaku edition will be exciting from now on, so please look forward to it!
[Nao Toyama (role of Suma)]
I’m Nao Toyama, who will play Suma, one of Tengen’s wives!
As the long-awaited sequel to “Kimetsu no Yaiba”, I hope that the characters will become more attractive in the beautiful animation and reach you.
I will play Suma as much as I can! Please look forward to the broadcast!
[Atsumi Tanezaki (role of Hinazuru)]
I’m Atsumi Tanezaki, who will play Hinazuru, one of the three brides of Umeda Tengen, who is the most wonderful and cool. It would be great if the three brides could get close to each other, so it would be great if the “Yukaku edition” could be colored lively and gorgeously. Thank you for your cooperation.