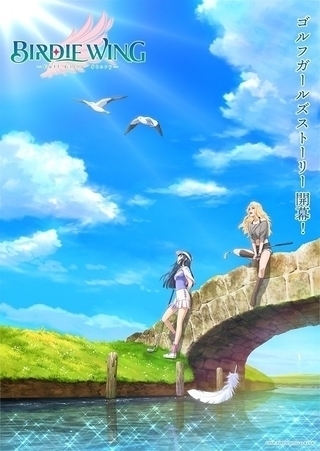 (C)BNP/BIRDIE WING Golf Club
Toru Furuya, Shuichi Ikeda, Ami Koshimizu, and Akira Sekine will appear in the original animation “BIRDIE WING -Golf Girls’ Story-” based on women’s golf. The first promotional video has also been released.
This work is a genius golfer who participates in betting golf in Europe and earns a living, “Rainbow Barrett” Eve (CV: Akari Kito), and a “innocent tyrant” who purely enjoys golf in the front world with a large corporate daughter. Aoi Amawashi (Aoi Amawashi / Asami Seto) depicts how talents collide with each other and are influenced by each other and change. Toru Inoue, the Japan national team coach of the World Junior Golf Championships, will participate as a supervisor.
Furuya and Ikeda are known to have played their fateful rivals in “Mobile Suit Gundam,” but Furuya is now an advisor to the prestigious golf school Raijin Girls’ Academy Golf Club. ), Ikeda will play the role of Leo Miraforden, Eve’s golf master. Furuya said, “I resisted the role I’ve heard somewhere, but I lost the stubborn persuasion from the staff (laughs).” .. Ikeda also said, “It seems that Mr. Furuya, who is a fateful rival, has also appeared. I wonder if there is a scene where the two face each other … I’m looking forward to the future development anyway,” he said and scattered sparks.
Koshimizu is Aoi’s best friend, Shinjo Amane, an exclusive caddy who is good at meteorology and information statistics, and Sekine lives in the slum area of ​​Nafres, and Lily Lipman, who is the caddy of Eve, who is the earning head. play. The full comments from each cast are posted on the official website.
The first PV is a video of Eve and Aoi shooting shots respectively, and the characters played by the cast members announced this time will also appear.