The story, the characters, the world, everything is original! "FINAL FANTASY BRAVE EXVIUS" is now on sale !!

The story, the characters, the world, everything is original! “FINAL FANTASY BRAVE EXVIUS” is now on sale !!
December 08, 2021 19:050
RPG smartphone game 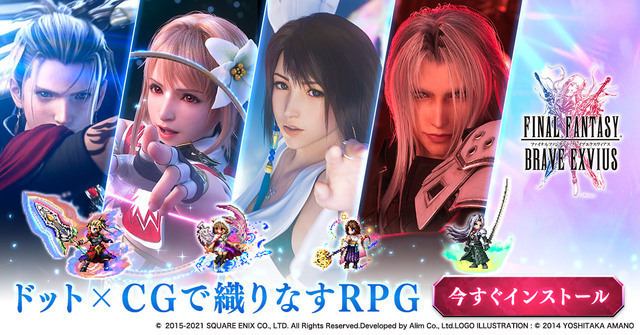 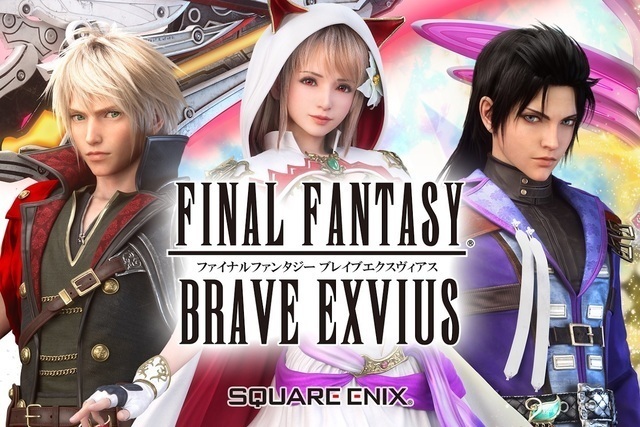 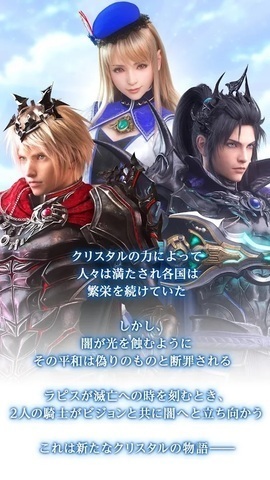 ▼ Easy operation but highly strategic battle
A highly actionable battle that starts moving when tapped.
You can enjoy an incandescent battle full of strategy by combining magic and abilities.
A new form of battle that combines active time battle and command battle is born here.
▼ Capture the dungeon by exploring the field
Operate the character with touch to explore the field and dungeon.
Battle with monsters, find items, find hidden passages, discover new routes …
In addition to collecting information, it is important to prepare for adventures such as shopping and ordering quests in the city. The real thrill of RPG is condensed here.
▼ Characters move lively!
The latest dot technology gives a new breath to the world of FF.
A variety of actions shown by unique characters.
Full of powerful productions such as special moves and magic. 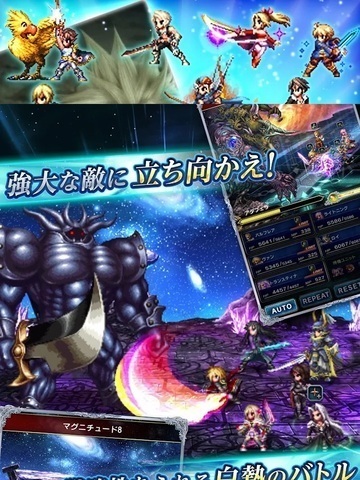 ▼ Powerful CG movie for summoned beasts and characters
A high-definition CG movie produced by Square Enix’s proud video group “Visual Works”.
The familiar summoned beast production of the series is a masterpiece of quality.
In addition to the FFBE original characters, the main characters of FINAL FANTASY have also appeared one after another as characters with CG!
▼ Successive FF series characters also participate!
Many familiar characters from the FF series have appeared.
Legendary warriors gather here, transcending time and space. 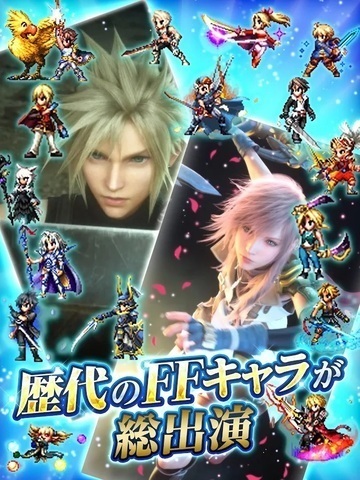 Story introduction
Knights of the Kingdom of Gran Shelt “Rain” and “Lasswell”. They grew up like brothers from an early age and were good friends and rivals.
One day, Rain and Lasswell find a shooting star during a patrol mission on a flying boat, and are entrusted with a wish by a mysterious girl “Fina” born from Crystal, and head for the temple of the earth. There was a powerful enemy in armor, “Verias of the Eternal Darkness,” who was trying to destroy the enshrined “Crystal of the Earth.”
Rain and his friends destroy the crystal without doing anything due to his overwhelming power.
Rain and Lasswell set out with Fina to protect the remaining crystals.
Coloring the adventure is the unique companions you meet in each country.
A girl “Lido” who dreams of building a flying ship “Flying Boat”, “Nicol” who works as a warrior in the city of water, “Jake” who leads an insurgent army in the land of fire, looks young but over 700 years old The living wise man “Sakura”.
And another existence, “Majin Fina”, was born from Fina who has no memory.
Rain and Lasswell fight against “Verias” including the everlasting darkness with the help of their friends.
Eventually, they learn about Verias’s long-cherished wishes and arrive at the truth of Rain’s father, Regen, who hasn’t been seen for many years.
Verias destroys all the crystals and destroys the world.
Can Rain and Lasswell overcome them and protect the Crystal and the world?
This is a new crystal story–
From the App Store
download
From Google Play
download
[Game information]
■ “FINAL FANTASY BRAVE EXVIUS”
Genre: RPG
Compatible models: iPhone / Android / PC
Price: Item charge type (free to play)
(C)2015-2021 SQUARE ENIX CO., LTD. All Rights Reserved. Developed by Alim Co., Ltd.
LOGO ILLUSTRATION : (C) 2014 YOSHITAKA AMANO

タグ: everything is original! "FINAL FANTASY BRAVE EXVIUS" is now on sale !!the charactersThe storythe world