The work that had been given up suddenly started to be distributed. The difficulty of putting out Chinese characters in this era is also conspicuous, the new animation situation in October in China [Anime situation of Chinese otaku]
December 05, 2021 11:000
Planning Article Anime Column Chinese Otaku Anime Circumstances 2021 Autumn Anime 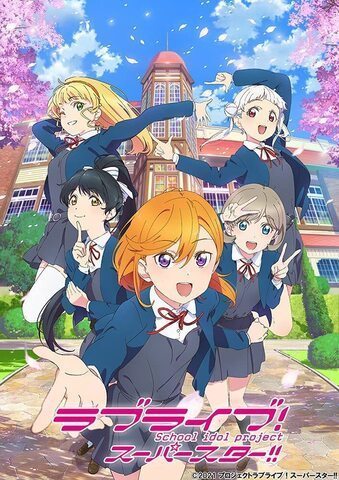 Difficulty of modern Chinese characters that can be seen from the popularity of “Tankuk” in China
For Chinese nerds
“I want Chinese characters (or Chinese characters) who can be convinced that they like interesting Japanese animation to play an active role.”
It seems that it is a more or less common wish, but one of the main characters of “Love Live! Superstar !!”, Tankuk, is a Chinese character that makes them very happy.
According to Chinese otaku, Kara Kaoru is evaluated as a modern Chinese character that is different from the Chinese characters that appeared in Japanese anime, manga, and games before that. ..
In addition to character setting and activity in the play, acting with native Chinese by a voice actor from China, etc., in the Chinese otaku neighborhood
“The Chinese people who appear in Japan’s two dimensions are all Chinese dress characters with dumpling heads that you never see in reality!”
Even those who say that it is a character that is accepted favorably.
I think that it will be a good example of “If you do so carefully, you can become popular in China today.” However, from another direction, we can also see the difficulty that “even if you do so far, it may be useless depending on the situation and how it is received.”
Nowadays, it is very popular in the Chinese otaku area, but it seems that everything was not going well up to that point.
July 7th (currently set to July 17th), which was the birthday of the original setting of Kara, is said to be the seventy-seven incidents (the Marco Polo Bridge Incident in Japan) that are conscious of something related to Japan in China. Since it was the same day, it became a big problem in China, and other settings and copyright pictures were criticized, including those that were awkward, and it was quite messy at the time of the initial action. It is a pattern.
Of course, the Seventy-seven Incident and the 918 Incident (Manchurian Incident) are also mentioned in Chinese textbooks, and at that time of year, media articles and related events appear in China every year, so Japan for China. Using July 7th for related works and publicity is very risky.
Not limited to this “July 7th”, there is a risk of stepping on landmines due to the common wisdom and customs of modern China that are not known in Japan unexpectedly in China, and it is easy to do so in the current Chinese internet environment. It will lead to flames.
Especially in China in recent years, since the material that inflames the flame can earn the number of views of the video, it is one of the standard methods to burn the two-dimensional material in Japan, so the risk is significantly higher than it was a long time ago. doing.
And since such a problem becomes “how to interpret it on the Chinese side”, even at the time of a small fire, when it becomes a certain scale of flame, “the creator side has no such intention. Even if you say “ta”, it will not be understood, and even if you apologize, not everyone will be convinced, so it will be difficult to get rid of it.
Also, on the Japanese side, if information about the flames related to China and the mess of its response spreads, the air in the fan area will get worse, and it is said that he is paying attention to China and neglecting Japanese fans and old fans. It can be received. And as a result, it is possible that more Japanese fans and fans from other regions will be lost than the fans that can be acquired in China.
In addition, the Chinese market has lost its medium- to long-term outlook due to recent pressure on entertainment content and heightened international tensions.
There is no shortage of Japanese otaku content that has been stalled in the Chinese market due to fire, political issues, and the impact of the new Corona over the last few years. At present, it is unclear whether or not the animation will be distributed and when it will start to be distributed, and it seems that there is no prospect of holding an event locally.
The delivery of “Love Live! Superstar !!” in mainland China, which had been expected to be possible, was delayed by several months from its broadcast in Japan. Also, during that time, there was no announcement to the fans all the time, which was a common response in China, so local fans became enthusiastic, and some people found it difficult to maintain their enthusiasm for the work.
In the recent Chinese otaku neighborhood
“I haven’t seen a good Chinese character these days.”
“On the contrary, Chinese characters are less likely to appear.”
I often see complaints such as, but from Chinese otaku people who understand the background situation surrounding otaku content.
“Given the current risks and returns, it may be inevitable that the number of Chinese characters will decrease.”
There was also a mourning voice.
When I follow these circumstances, I realize once again that even entertainment content must be strongly influenced by the social situation and values at that time, in addition to the culture of each region. I will do it.
(Sentence / Hundred yuan basket sheep)